Well last week was the 3rd London VMUG meeting of the year and the last in London. I arrived to find it fairly empty due to some train issues. It was also the day of the EU referendum so we won’t forget where we were on that day. Given the train issues on the way home due to some flooding I was glad to of got up early to of gone and voted before traveling.

The first session of the day was from the gold sponsor Simplivity.

Stuart gave us a very quick corporate presentation then took us straight in to the technical heart of the product with a hands on demo. Through the demo Stuart was able to demonstrate how simple the software is to use, through the vCenter Plugin, administration is easy and configuration of policies is simple.

The heart of the product is SimpliVity’s OmniStack software which enables a powerful set of hyperconverged technologies. The OmniStack technology is composed of the Data Virtualization Platform software and the purpose-built Accelerator Card.

The key points are:

For more information take a look at their web site http://www.simplivity.com/ and watch the short video below:

Stuart mentioned that you can Register for a free hands on test drive, these are typically 3 hours and run around the country and I may well attend a test drive in future.

You can register at simplivity-testdrive.com, The next session is the 12th of July in London.

Next up was Chris Dearden @ChrisDearden who hosted the debate – Cloud In/Out BREXIT for Your Datacentre. 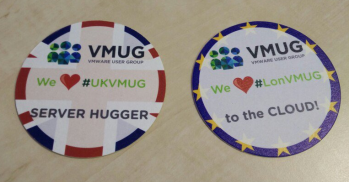 We then had a somewhat humorous look as to what was best place to host your servers either In or Out of the cloud. There was some healthy debate between the two sides covering issues over costs, workloads, applications, backups, speed of deployment and even beards at one point!

Before the vote there was a bit of a wobble from a few people who wanted a hybrid option but this was a simple In or out Vote and the result was a clear victory for the in Datacanter  at 30 server huggers compared to 14 cloudlovers. I hasten to add I was one of the luddites and a server hugger.

Howard took us through the latest changes to the Vmware EUC (End user Computing) product set.

The purpose of which is to deliver an unmatched identity defined contextual experience to the user from Consumer to Enterprise. Delivering a full spectrum of digital workspaces across devices, or to put it simply Any platform any App.

Workspace one has gained elements of Airwatch including MAM (Mobile App Managmeent) containment support. Horizon 7 has a number of new features including:

Windows 10 has the blurred the way we use Windows as it now runs on laptops, mobiles and tablets. This has changed the way that us corporates need to think about managing our windows devices it’s no longer about joining the domain and group policies.

To help manage Windows 10 devices horizon has introduced VMware Trust point Powered by a partnership with Tanium and is the Ideal solution to combines policy and control with endpoint security and allows you to:

You can see more on their web site http://lakesidesoftware.com/ and I would recommend the short the video below.

The Agent is a Scalable lightweight client and looks at what users are doing. 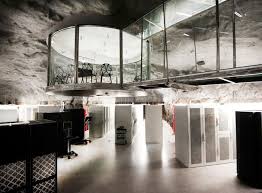 Again this was quite a humorous breakout session where 3 people presented to us on a number of situations involving extreme datacenters. Which were above and beyond what we would call normality.

Matts example was one about putting VMware on to ships of the Royal Navy. So obviously apart from any required security clearances he mentioned a few points that I have had some experience of (although not all)

Alex’s Example was one of a rural site, something I can relate to living in a small rural Hampshire village where we have limited mobile access (mainly none) and limited broadband although I recently got an increase to around 3.5MB, his Issues included:

Eds example was more extreme that Matts, with all the same issues but only in a submarine!

For reasons of national security I can’t repeat what Ed told us, (and it wasn’t because I was too busy laughing honestly)

Quote of the session, “How exactly do you rebuild an array when someone has pulled out two of the disks”

vBeers was a bit different this time, we found ourselves at FourPure brewery in Bermondsey @fourpurebrewing apparently some of our sponsors are quite well know there! food was supplied by Le Bao @LeBaoTruck and I must say I enjoyed my first couple of Baos and it was a shame I had to leave for the train. So a big thanks to the sponsors for a great night.